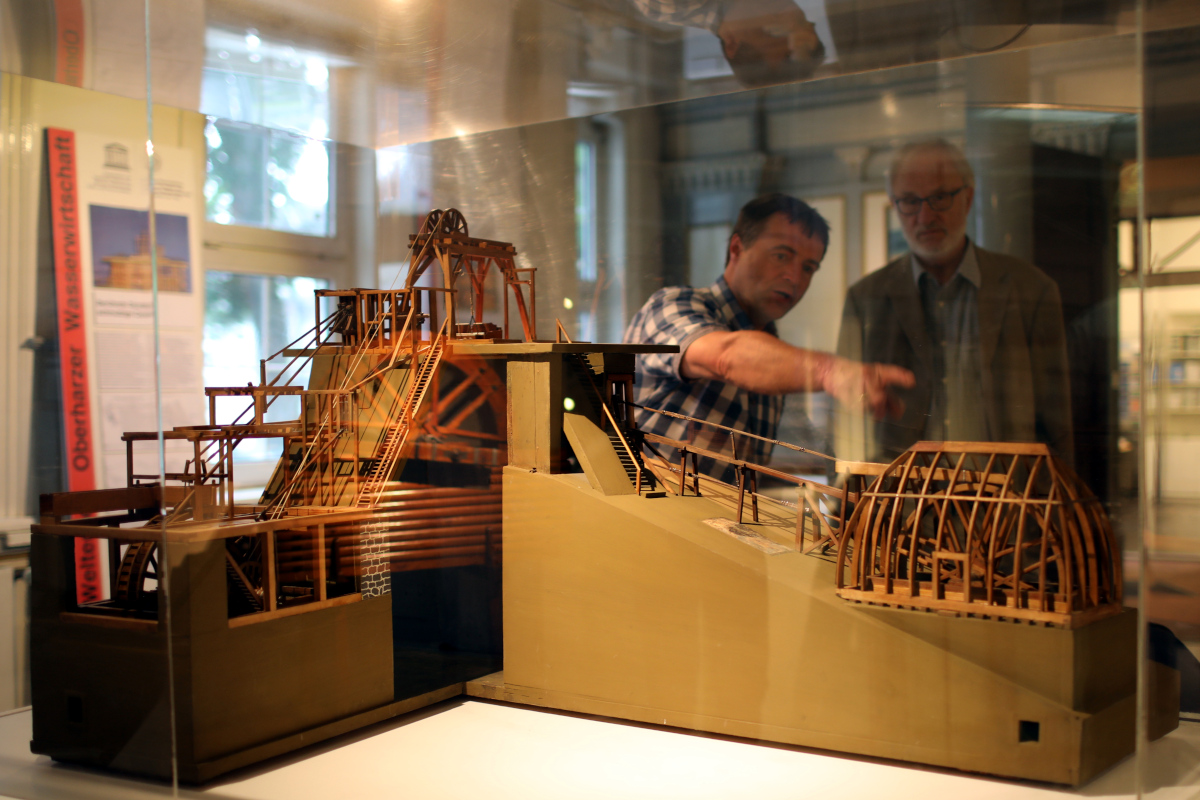 The technical and landscape models impressively build a bridge between the historical path of a three-dimensional representation for understanding and conveying the interrelations in space and function and our current attempt to achieve precisely this with the most modern means.

The first five models refer to large spaces. These include four models  built in the 1920s by Oskar Langer, a  mine surveyor of the Oberbergamt, a model of the Rammelsberg deposit and three landscape models, one Clausthal-Zellerfeld in 1661, two shafts and tunnels of the Clausthal mining inspection and finally a model of the (ore) lodes, shafts and tunnels of the western Harz mountains. As the last model of this group the table model of the Oberharzer Wasserwirtschaft (1892), which covers an area of 200 km², was selected. It was produced by the Royal Oberbergamts-Markscheider Sandkuhl in 1892 based on his corresponding cartographies with the participation of mountain pupils and was on display at the World Exhibition in Chicago in 1893. In addition, there is a coloured  mine plan by A. Sandkuhl from 1893, which forms the planning basis for the model, as well as an older mine maps by A. Dumreicher from 1868.

The next group of three models  is located in the Dorothea and Caroline mine district, east of Clausthal. These are the Saiger model (vertical model) of the Dorothea/Caroline pits (1849), a model of the Dorothea pit (1820) and the model (1828) of the 300- fathom track laid in 1807 to connect the Dorotheer shaft with the Dorotheer ore washing. In addition to these models, there are prints, coloured pit plans and photographs.

Another four models depict objects from the Thurm Rosenhof mine district, west of Clausthal, as well as a special machine model of a water column machine, the oldest of its kind. These are the technical teaching model Fahrkunst (1840-1900), the model of securing the Rosenhöfer Fahrkunst with chains and crushers in case of a broken boom (date unknown) and the model of the Rosenhöfer Fahrkunst (1850). The oldest machine model in the collections dates from 1747. The first Harz water column machine was built in the Treuer Schacht near Zellerfeld. In addition to the above-mentioned digital copy of the original Thurm Rosenhof chamber of a reversible waterwheel, additional material is also available for this group.